NO ONE wants to hear that their writing sucks. It hurts. Yet while we may yearn for praise, we can learn to be grateful when we hear tough criticism. When we finish a draft, we think it's perfect. If we thought it was flawed, we'd have written it differently. And there's no point deluding ourselves that we can be objective about our writing at this stage.

What we need to remember is that the act of writing is not only about committing your thoughts and ideas to a document. Writing is also about finding out what you think — as you write.

We often need feedback to challenge ideas that are still embryonic, and to help us clarify how best to express them. The key to getting useful feedback is to enlist the right people, not just those who will naturally agree with us, and to brief our helpers well on what we need from them.

When you have a long, complex document — perhaps a business proposal or a project report — you'll need a team of helpers. For a short, sensitive email, you can scale back to one person.

People love to give feedback. It makes them feel valued — unless you've previously asked them for help and then ignored everything they've said. Chances are that you briefed them badly.

People will naturally drift towards comments on punctuation, grammar and spelling since these are mostly objective issues we can justify. But you need big-picture comments too.

You'll be tempted to look for helpers who'll offer kindness and reassurance. Yet you need the very truth you're aiming to deliver to your readers.

That doesn't you don't want sadistic shredding of your work either. You're after balance and reason, not extremes. So choose a mix of helpers. How many you recruit is up to you. Ideally, you want to cover these bases.


You may cover these bases in two people, or you may need more. Keep the number of helpers to a minimum. You're not forming a government.

Where you have more than one helper, you need a sensible system that avoids creating new muddle.

Your helpers won't automatically know what you want your writing to achieve. An invitation to 'Let me know what you think of this' is of no use at all. It's a veiled request for people to tell you it's brilliant. You may get an unpleasant surprise when people give you a blow-by-blow plan for how they would rewrite it — if only they could be bothered to do it for you.

You need to give a clear brief with details about what you want people to consider, and — equally important — what you want them to ignore.
You probably haven't enlisted professional editors, so be kind about the results. And bear in mind that helpers aren't always right.

Factual errors and possible misinterpretation
Ever read something about your own industry or personal obsession and spotted an error or misunderstanding of something basic? How did you view that author and the rest of their piece? With mistrust? If they can get this wrong, where else did they go wrong in areas where I'm no expert?

Don't forget to cross-check information that should agree. These details may be at opposite ends of a document, where they're hard to spot.

Likely reader reaction
You want engagement and dialogue. So, if you know someone who takes the opposite stance in any conversation just for the hell of it — ask them for feedback.

You want to anticipate all likely responses, even those you find annoying. Deal with these opposing views now. Don't try to hide conflict. Plant a flag on it, and turn it to your advantage. You'll be sending out the message that you're someone who thinks of everything and is prepared to tackle tough issues.

Language feedback
Our use of language is a mix of cut-and-dried precision and subjective style. It's also about you, your readers, and your aim to change the world in a way that only you can do.

This is the area where you're likely to feel most insecure. Listen to language feedback, but follow your instincts too. If you aren't sure that suggestions are an improvement, ignore them or rewrite until you know the area being criticised is in a correct or acceptable form.

Embrace corrections that are no-brainers. Pick and choose from the subjective ones. Ask yourself how strongly your readers are likely to feed about strict grammar rules. Will they embrace a more casual style that suits you and your purpose?


WHAT CAN GO WRONG?

People will be kind, and you'll feel a 'but' hanging in the air
You are waiting for the penny to drop. And there's usually a penny... So push. Your helpers may feel there's a problem, without being sure what it is. Don't ignore this. If you can only get a vague response, work out the details yourself.

People will over-edit and suggest a rewrite in the style they'd use if it were their document
You may have been soft with your brief, or your helpers may be trying to show off, or indulge in a power trip. Cherry pick from their suggestions and then do your own thing.

People will spot a flaw — and it makes you incandescent with rage.
Sadly, they're right. Drop all resistance. You knew there was a problem when you started writing and ignored it because you didn't want to interrupt your flow. You reread your work and ignored the issue again, thinking that no one would notice. And they have...


WHAT ELSE CAN I DO?

Read your work aloud
This will help you to pick up stray pompous words that stand out from your simple, direct work. If you stumble while reading aloud, readers will stumble as they read. If you wince... if you pause... if anything prompts you to stop reading... you have fresh alarm bells.

Check more than spelling
When you check a spelling, check the meaning too. You may find you need a different word.

Find one more helper
You want a fresh pair of eyes able to spot final flaws. Every time you change something, you   open the way for new mistakes to creep in.

You have to let go eventually. When you send something out into the world, you'll probably spot at least one mistake. Don't beat yourself up. You will never achieve perfection.
Posted by Susan Feehan at 10:00 No comments:

Susan Feehan
I write, and I help others to write well in pursuit of their own goals. Great writing is about more than clever use of grammar, punctuation and spelling. We put our passions and dreams into our words, using them to create world-class brands, companies and jobs, We write to rally causes, to provoke debate, and to hold people to account. We write to find out who we are and what we think. Sometimes we write to change the world, sometimes simply to entertain. Whatever we want in life, writing helps us to get there. We are what we write — so who are we? writeratwork.uk

NO ONE wants to hear that their writing sucks. It hurts. Yet while we may yearn for praise, we can learn to be grateful when we hear tough... 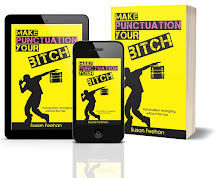 Solid punctuation skills won't stop you from writing badly, but neither do you want poor punctuation to let you down. Available now on Amazon — along with a FREE tips book.

MY BOOK — NOW AN AMAZON BESTSELLER 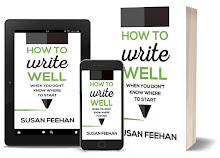 Never before has it been easier to write and influence the world; never has it been easier for our words to crash and burn. Why does the act of writing turn rational people into rabbits frozen in car headlights? Why doesn't a grasp of grammar help us know where to start? And if we are what we write, does improving our writing change who we are?